The Red House from Hesteyri

A large steamship made its way into Hesteyrarfjörður in May of 1894 and dropped anchors outside Stekkeyri, about two kilometers from Hesteyri. The arrival of that ship was chronicled in Hornstrendingabók:

Soon they began bringing ashore an assortment of strange contraptions, huge logs and building wood, machines and the like. This is said to have come as quite a surprise for the inhabitants of Hesteyri, who had not heard of any such plans. These were the Bull brothers, „Bröderne Bull“, from  Tonsberg, Norway who planned to build a whaling station on Stekkseyri and had leased the land from the merchants Ásgeirsverslun in Ísafjörður. The local farmers in Hesteyri had no say in the matter. This was the starting point of operations on a scale which this community had never seen. The newcomers put wooden floors down to the shore and built wharves. Houses were built, including the largest one the locals had ever seen, inside which machines for processing whale products were assembled. Other new houses included a two storey residential barracks where workers and even supervisors were supposed to live.

A whaler called Odland plans to take up residence in Hesteyri, where M.C. Bull operated. He arrived on an enormous steam boat on the 15th, bringing with him all his hunting equipment, building materials and factory machinery.

That venture most likely built the residential barracks in Stekkeyri when they built the new whaling station, but there is also a possibility that Bröderne Bull left their barracks behind when they moved away. About six weeks later, June 3rd 1902, Þjóðviljinnpublished the following recount:

Odland, who has been operating the whaling station in Tálknafjörður, founded a new whaling company in Norway last winter and has now built its operations at Hesteyri in the Jökulfirðir, where Bull ran his whaling station before relocating to the Eastern fjords last year.

Odland‘s company was named Heklaselskabet and his co-owners were based in Haugasund in Norway. The whaling station was named Hekla and with time, Stekkeyri came to be called Heklueyri.

For decades after whaling in Iceland came to an end, the station was utilized for the processing of herring.

In December 1925 an advert was taken out in the journal Vesturland where a herring factory was offered for sale, along with five steam powered fishing vessels and two storage containers made from reinforced concrete. This is said to be the herring station in Hesteyri.

The advert states that the land which houses the station is very spacious, and used to be a whaling station before being modified into a herring plant in 1924. Included was a residential house which could hold up to a 100 people.

Kveldúlfur inc., the largest fishing company in Iceland, founded by entrepreneur Thor Jensen and later operated by his sons, bought the properties and operated a quite busy herring plant there until 1940.

In the beginning of the 1950‘s the government implemented a special property tax against major property owners. The law allowed for the tax to be paid with real estate, a provision which Kveldúlfur utilized by renouncing the herring plant in Stekkeyri, unused for over a decade, to the government.

Shipping in Ísafjörður fell into a slump in the beginning of the 1950‘s when the older, more established companies began shrinking. A new generation emerged whose representatives would run ships and fish factories in the Ísafjörður area for the next decades.

In October 1954, five locals came together to establish an enterprise both for fishing and fish processing. They were Jóhann Júlíusson, Þórður Júlíusson, Guðmundur Guðmundsson, Marías Þ. Guðmundsson and Ásgeir Guðbjartsson, a promising young captain. Guðmundur had leased a 43 tonne vessel, Ásbjörn ÍS 12, from the local cooperative, which their new company, named Fiskiðjan, took over. The business went very well and soon almost twenty people were working there, a boon for a town which had fallen on hard times economically. The owners of Fiskiðjan founded two fishing companies, Gunnvör inc. and Hrönn inc., each with its own ship, both of which processed their catch in Fiskiðjan plant which was located in a leased house called theVöskunarhús in the dock area of Ísafjörður. 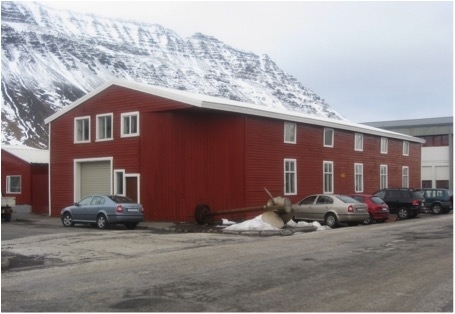 The Vöskunarhús, however, did not prove to be a convenient facility for the operation, so the owners started looking for a more fitting house. The residential barrack at Stekkeyri, now owned by the government, was believed to be suitable and so Fiskiðjan purchased it.

Þórður, one of the owners, took a few men up to Stekkeyri where they dismantled the house, piece by piece, in a few days. The building material was brought to Ísafjörður, using the fishing boats Gunnvör and Guðbjörg during off-season, and reassembled in a slightly different way than before, by the docks.

The journal Ísfirðingur published an article in October 1956 bearing the title A New Fish Factory which included the following:

The Fiskiðjan is finishing the construction of a quite large building which will be used for the processing and storing of fish. It is made out of timber and measures 11 by 30 meters. This greatly improves Fiðskiðjan‘s production facilities. On the second floor there will be a break room for workers, and storage for both fish and fishing equipment.

The building is still in the same place but is now commonly called The Red House. It is currently used as a storage facility for the shipping division of Hraðfrystihúsið – Gunnvör inc.